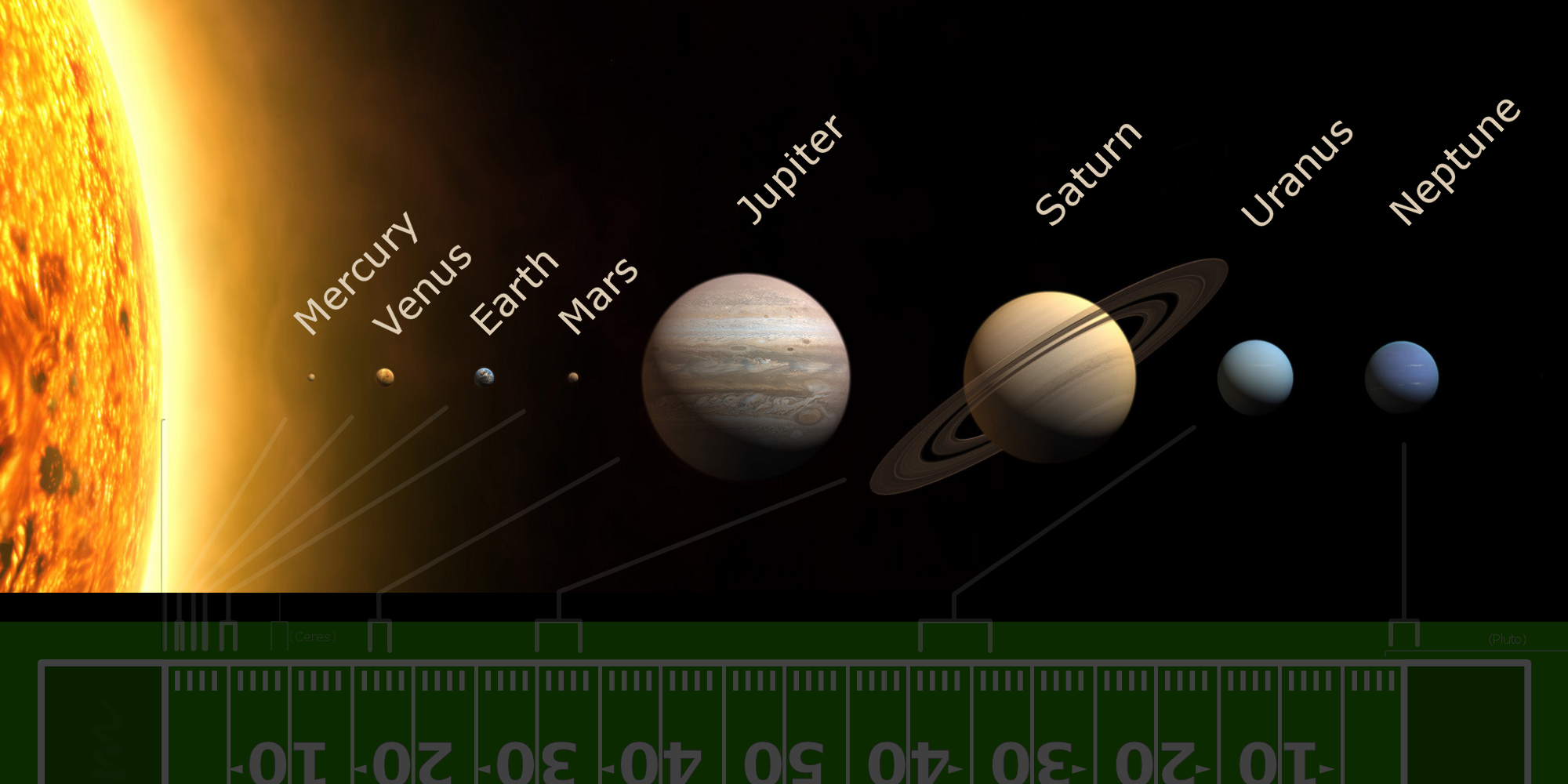 The solar system is one of the most mysterious subjects in science. But man’s understanding of outer space has improved considerably due to technological and scientific advances.

Planets make up a significant part of the solar system, some of which are observable by the naked eye.

The solar system consists of the inner and outer regions. The inner planets are Mercury, Venus, Earth, and Mars.

These planets have moderate to high temperatures due to their proximity to the Sun. Planets on the outer region are also referred to as the Jovian planets, including Jupiter, Neptune, Uranus, and Saturn.

Pluto is the outermost planet in the solar system, but planetary scientists still don’t know much about it. Moreover, some have argued that it’s no longer a planet in Earth’s solar system.

Read on as we review the planets in the solar system, their unique features, and their similarities.

Mercury has the shortest distance from the Sun at approximately 36 million miles. The planet’s surface temperature can reach 800°F (430°C) during the day and -290°F (-180°C) during the night. These extreme temperatures make it uninhabitable for animal and plant life.

Mercury is smaller than Earth and has an equatorial radius of 1,516 miles. This makes it the smallest planet in Earth’s solar system, excluding Pluto.

Mercury is similar to Venus because it has no moons, and both planets experience incredibly high temperatures during the day. Mercury is also similar to the three inner-region planets because its core contains iron and other silicate minerals.

As is the case with most planets in the solar system, Mercury’s atmosphere cannot sustain life due to solar radiation.

In addition, like other terrestrial planets, Mercury has no rings in its orbit. Mercury is also another planet that man has sent robotic missions to explore.

Mercury is not that far from Earth at approximately 66 million miles, making it visible to the naked eye.

Similar to Mercury, Earth, and Mars, Venus has a rocky surface. Venus is the second closest planet to the Sun. Venus is the hottest planet in the solar system due to a runaway greenhouse effect created by massive amounts of carbon dioxide and sulfuric acid in its atmosphere.

Venus is approximately 25 million miles from Earth, and the distance between it and the Sun is 67 million miles. This planet’s temperature is – 867°F (464°C).

Scientists attribute these similarities to the fact that both planets originated around the same time. Similar to Mercury, Venus is observable without the help of a telescope.

The planet we call home is the third planet from the Sun at a distance of approximately 92 million miles. Like Venus, Mercury, and Mars, Earth has a rocky terrain, and its core contains iron and other metals.

Earth also has an atmosphere similar to Mercury and Venus. However, Earth’s atmosphere mainly consists of Nitrogen and Oxygen. These atmospheric constituents and the Sun’s distance from the planet make Earth habitable to plant and animal life.

Similar to other terrestrial planets, Earth doesn’t have any rings in its orbit.

Earth is similar to all planets except Venus, and Mercury, in that it has a moon. Earth has surface gravity similar to Venus but slightly higher at 9.8 m/s².

The surface temperature on Earth is 59°F (15°C). Earth has a similar rotation period to Mars, with our planet making a full rotation in 0.99 while Mars makes it at 1.02 Earth days.

Mars has an equatorial radius of about 2,100 miles, making it smaller than Venus and Earth. The surface temperature of Mars is 85°F (-65°C), and its atmosphere mainly contains Carbon Dioxide, Argon, and Nitrogen.

Similar to Earth and other terrestrial planets, Mars has no rings in its orbit. But Mars has two moons bound to its gravitational pull.

Like Earth, Mars contains small quantities of water vapor and oxygen in its atmosphere. Many scientists have argued that Mars may be habitable or had life or water in the past. A year on Mars is equivalent to 687 days. Similar to Venus and Mercury, Mars is observable without a telescope.

Jupiter is 484 million miles from the Sun and 365 million miles from Earth. Unlike the first four planets, Jupiter doesn’t have a solid surface but clouds consisting of ammonia. The temperature of the planet is -166°F (-110°C). Jupiter’s atmosphere consists of Helium and Hydrogen.

Jupiter is the largest planet in the solar system, with an equatorial radius of 43,441 miles. Scientists still don’t understand Jupiter’s inner core as no successful spacecraft have entered the planet’s atmosphere, only its orbit.

Similar to other planets in the solar system, except Mercury and Venus, Jupiter has moons in its orbit. Jupiter has about 80 moons.

There is speculation that some of Jupiter’s moons contain water, even oceans underneath. Like all other giant planets, Jupiter has rings. One year on Jupiter is equivalent to 12 years on Earth.

Like Jupiter, Saturn is massive in size and has a radius of approximately 36,164 miles. For context, at least 700 Earths can fit inside Saturn.

One of the similarities between the planets in the outer region is that they have freezing temperatures. Saturn has a surface temperature of about -220°F (-140°C).

Saturn also has rings around it like Jupiter, and the planet’s atmosphere consists of Helium and Hydrogen.

Similar to Jupiter, Saturn is a gas giant. Little is still known about what is at the core of the planet. Like other gas giants, Saturn has many moons, making it appear like a mini-solar system.

Some of Saturn’s moons may have conditions similar to Earth in that they may support life. Saturn has a similar surface gravity to Earth at 10.4 m/s².

The planet with the funny-sounding name is approximately 1.8 billion miles from the Sun. Like Jupiter and Saturn, Uranus is massive and has a radius of about 15,720 miles.

Uranus’ atmosphere mainly consists of atomic helium, methane, and molecular hydrogen. The mass of Uranus consists of icy materials, and the planet has a rocky core.

Like Earth and other outer-region planets, Uranus has several moons orbiting around it.

The planet also has rings like Jupiter and Saturn. Uranus has an internal gravity of about 8.87 m/s², closer to Earth’s and Saturn’s gravity.

Neptune’s atmosphere contains icy materials and gas, such as Hydrogen, Helium, and Methane.

Like other large planets, Neptune has several moons and rings in its orbit. The planet can’t support life. A year on Neptune equals 165 years on Earth. Neptune’s radius is approximately 24,600, making it slightly smaller than Uranus.

Similar to Uranus, Neptune has a rocky core. But little is still known about this planet due to its distance from Earth. Neptune’s internal gravitational pull is slightly higher than Earth’s at 11.15 m/s2.

Known as the dwarf planet, Pluto is 3.2 billion miles away from the Sun. Pluto is in the Kuiper Belt and has a width of about 1,400 miles.

Pluto’s atmosphere has carbon dioxide, methane, and nitrogen. Similar to other planets, Pluto has moons in its orbit.

Pluto is extremely cold like other outer-region planets, and temperatures may be as low as -375°F (-225°C). Like all other planets, Pluto orbits the Sun.

But a year on Pluto is equal to 248 years on Earth. Pluto is similar to Earth and other terrestrial planets because it has no rings.

Learning about the solar system is always interesting. Here are some questions people often ask:

How old is the solar system?

Are there any habitable planets?

Currently, no planet is habitable in the solar system apart from Earth. But scientists argue that millions of planets may be capable of supporting life in the Milky Way Galaxy.

What do all planets have in common?

One of the main similarities between the planets is that they revolve around a star with enough gravitational pull to keep them in their orbit.